The Global Snakebite Initiative recognises that lack of access to safe, effective, life-saving antivenoms is the most important obstacle that must be overcome if the prognosis of snakebite victims in poor, rural, developing world communities is to be improved. The current cost of effective polyvalent antivenoms (i.e.: products which can neutralise a wide range of venoms from species in a particular region or country) in Africa, puts access to them outside the grasp of typical snakebite victims in rural African communities. The result is that people either do not seek treatment at hospital (in favour of traditional healing), or they may only be able to afford to receive a sub-optimal dose. The consequences of the latter course of action are that:

We are currently developing a number of strategies to address these problems, and have proposed a pathway through which:

READ MORE: Ending the drought: new strategies for improving the flow of affordable, effective antivenoms in Asia and Africa.

The pathway will take the form of AntivenomAID, a new project operating under the private sector management principles of a Product Development Partnership (PDP) to develop safe, effective and affordable antivenoms. With an initial focus on sub-Saharan Africa, the PDP comprises a consortium of international scientists, clinicians and an antivenom manufacturer working to exploit recent advances in immuno-proteomics to design and develop a new Pan-African polyvalent antivenom effective against all the most medically important snakes of sub-Saharan Africa.

Africa’s poor bear the brunt of snakebite injuries, but poverty denies them access to treatment and hope of a good outcome. The new AntivenomAID PDP antivenom will substantially reduce current snakebite mortality (currently up to ~32,473 deaths annually) and the long term physical (including ~8,000 amputations annually) and psychological disabilities suffered by many African snakebite victims. Such an outcome in these impoverished communities will improve quality of life and increase the agricultural productivity of subsistent farmers.

AntivenomAID’s objective is to establish a benchmark for all antivenom products in the African market, and to reinvigorate a market facing collapse due to unaffordable pricing and widespread infiltration by sub-standard products. We expect that a longer term outcome of our approach, particularly as a result of a combination of community education about antivenoms, and engagement with governments, donors and other stakeholders, such as NRA’s, Ministries of Health and NGO-health care providers, will be increased awareness of the harm caused by cheap, poor quality antivenoms, and significant strengthening of both regulatory frameworks and health system procurement policies. We plan to work with all the stakeholders to develop a sustainable funding mechanism that will create an environment in which our new antivenom can be sustainably produced, supplied and used for decades to come with cost-effectiveness targets that compare favourably to other health interventions, making them sound investments for donors and governments. Our goal is to deliver at least 200,000 vials of this new antivenom to Africa each year, saving over 27,000 lives and preventing the loss of over 1.6 million disability-adjusted life-years (DALYs), and US$2.12 billion in lost productivity annually. 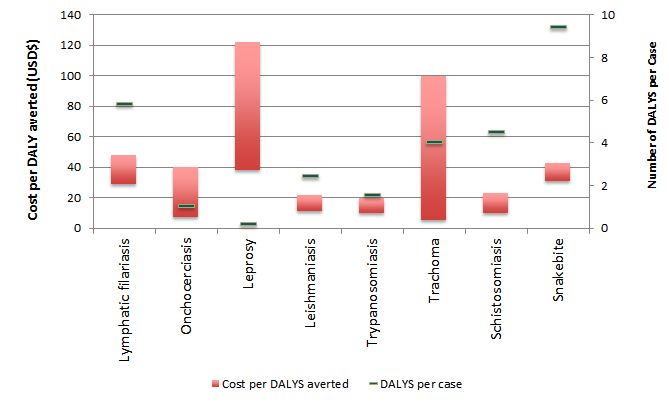 Comparison of average number of DALYs lost due to disease and the Cost per DALY averted for various treatment interventions. The new Pan-African polyvalent antivenom to be developed by the AntivenomAID PDP consortium would be a very cost-effective intervention compared to other NTD treatments.

The Global Snakebite Initiative also supports local projects which are aimed at improving access to effective, currently available antivenoms. These are independent initiatives established by in-country charities, and benefit many snakebite victims by making it possible for them to be treated with antivenom at no direct cost to themselves. We urge you to read more abut this projects, and to support them with donations to the GSI Public Fund. 100% of all donations to the Fund are applied to the projects nominated by you.

James Ashe (1925-2004) was one of Africa’s greatest field herpetologists, and established the Bio-Ken Snake Farm at Watamu on the Kenyan coast in order to supply snake venoms to researchers, and for use in manufacturing antivenoms. The James Ashe Antivenom Trust was established in October 2004 following James’ death, and it operates to make antivenoms available free-of-charge to victims of snakebite who would otherwise go untreated … READ MORE

A modest, unassuming couple in Swaziland are reaching out with their hearts and hands to help the victims of snake bite in rural Swaziland. Thea Litschka-Koen and Clifton Koen manage a large rural business in Simunye, Swaziland. Frustrated by the lack of medical services and in particular life-saving antivenoms, Thea and Clifton have set up a charity Antivenom Swazi to raise funds to establish to treat snake bite victims in Swaziland. READ MORE