Tragically the prevalence of antivenom in the developed world, where mortality from snakebite is less than 1%, is contrasted by declining antivenom availability and high morbidity in poor countries. The collapse of the snake antivenom market in Africa is one of the great medical tragedy of the twentieth century. Despite the promise of eradicating snakebite as a scourge of the tropical world that came with the invention of sérum antivenimeux, by the great French scientific innovator Calmette in 1894, the inability to adequately deploy it to save tens of millions of lives over the past 118 years is a shameful failure. Nowhere in the world is this more confronting than in Africa. But the reasons for it, however, are both difficult and complex. Despite high numbers of snakebite in Africa, recent decades have been characterized by declining production, loss of product confidence, and under-utilization of trusted life-saving antivenom products.

This has been due to a combination of factors, including:

Falling market demand and a lack of profitability has led some manufacturers to cease production of this much-needed product that has become commercially unviable. There are clear signs that manufacturer’s remaining active in the industry are compensating for reduced sales by raising prices; a move that will almost certainly depress demand even further. As the crisis has deepened, it has been exacerbated by the opportunistic infiltration of poor quality counterfeits and inappropriate antivenoms that neutralise venom from snake species on other continents, often with disastrous results.

The self-perpetuating cycle responsible for the decline in antivenom production in sub-Saharan Africa. Inadequate financial support for antivenom production and variable quality have catalysed the collapse of the antivenom market, which is now characterised by deficient supply, deficient quality control, rising prices and poor profitability.

Although an important humanitarian and social issue, death from snakebite lacks the status and assistance afforded to other international health crises in Africa. Part of the reason for this is that in an era where public health issues are often robustly taken up as socio-political causes, and specific interest groups lobby governments and donors to support their interests, snakebite has until recently been largely non-political, and without an effective voice at the table of global health organisations. Under-recognition of snakebite as a major medical and social problem has seen it neglected by governments, policy makers, international aid agencies and private funding bodies.

A LITANY OF CHALLENGES

Unreliable procurement, regulatory complexities, poor government transparency and inconsistencies within the industry deter most companies from developing new antivenoms for use in Africa. A recent survey of manufacturers identified a number of factors that discourage or prevent increased output:

When combined with the multi-layered drug distribution pathways in Africa, which see prices incrementally increased at every step along the way, it seems remarkable that there is any antivenom available in Africa at all. Good quality antivenoms made by proven, long-established manufacturers have sadly become unaffordable to all except a few. Analysis of the antivenom market makes it very clear that high volumes of production are what is needed to produce lower prices. At the same time, the higher the price, the lower the demand, which ultimately drives prices higher. 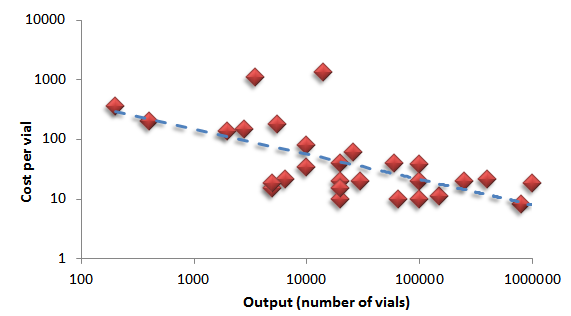 Current doses require multiple vials to be effective, rather than an efficacious single vial dose, and with the cost of a 5-vial starting dose of one of these products costing USD $800-1,000, it quickly becomes apparent that access to effective treatment is beyond the means of poor, rural Africans. Consequently, under-dosing is common (if all a family can afford is 1 vial, then that may be all the victim receives) and is associated with increased morbidity and mortality rates.

Strategies that restore the commercial viability of antivenom production, and maintain sustainable minimum quality control measures, are desperately needed. This is the aim of the Global Snakebite Initiative which is promoting a three-pronged approach involving:

GSI’s proposed pathway to creating new regional polyvalent antivenoms: Venoms obtained (★) in a variety of locations within each region (Africa and Asia) would be subjected to robust proteomic analysis and cataloguing. Representative venoms offering the best possible potential for broad polyspecific antivenom coverage would be selected, and standardised in batches for use as immunogens. These would be prepared and supplied to the group of antivenom manufacturers. Immunisation and subsequent production of the antivenoms would be carried out according to a standard protocol based on GMP production and QA requirements, and the batch lots forwarded to a centralised, independent laboratory where preclinical assessment, antivenomic studies and QC functions would be undertaken. All of this would be under the supervision of an external Prequalification Committee made up of regulators from major global NRAs. Clinical trials would be conducted under international supervision by local researchers in the countries where the antivenoms are to be licenced, and support would be offered to assist local NRAs in establishing appropriate capacity to regulate antivenoms in their jurisdictions. Once products are licenced, routine production would follow the same pathway, with the clinical trial function being replaced by one of routine post-marketing surveillance.

Repairing the damage to Africa’s bruised and bloody antivenom supply chain is far from an easy task, and the Global Snakebite Initiative alone cannot facilitate all that is required. It is imperative that African governments, institutions and agencies take a stake in this battle to improve African lives. GSI recognises that the political process of putting antivenoms on the global health agenda is a long and challenging one, more so, as world economies contract, and competition for scant health resources grows stronger.

The consequences for tens of thousands of African men, women and children if the global community does nothing are dire indeed. Some 20,000 lives will be lost to snakebite in Africa this year, 200,000 over the next decade. More than 5 times these numbers will be permanently disfigured and disabled. Your support will help us to change the future.